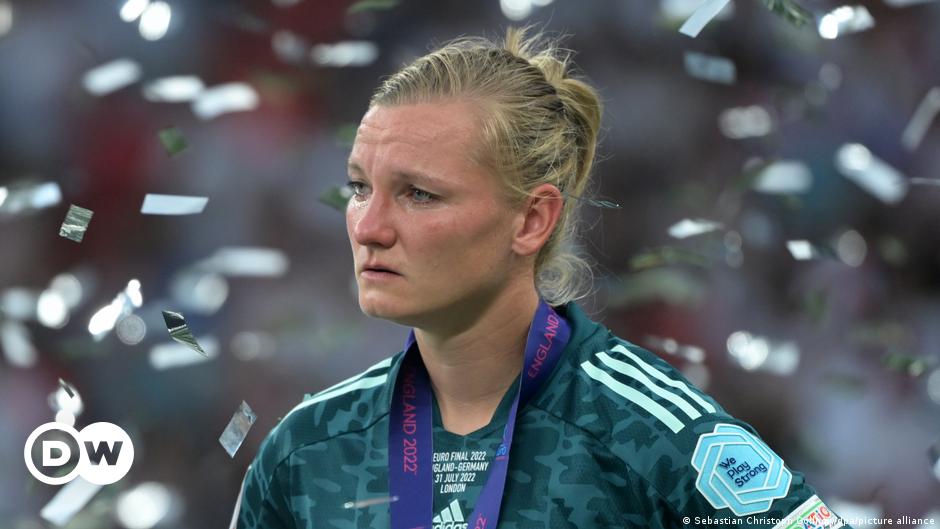 It was 19:33 local time in London when the DFB women’s dream of winning the title again was shattered. For 120 minutes they had fought a tough battle with England, coming back from a 1-0 deficit and forcing extra time, but Chloe Kelly’s goal in the 110th minute decided the final of the European Football Championship in their favour hostesses.

The German team then shed tears while the overwhelming majority of spectators at Wembley Stadium celebrated the first international title for an English women’s national team with their heroines to “Football is Coming Home” and “Sweet Caroline”. 87,192 were there live at this historic moment – a European Championship record, not only for women, in the 62-year history of European title fights.

“It did not work”

Germany’s top star of the tournament had to be comforted by the other players on the field – and above all, give consolation yourself. Alexandra Popp, who with her six goals in five games had become the symbol of the regained joy of playing, had to pass a few minutes before the final kicked off. The test during the warm-up was negative, a muscle injury made her use impossible. “That would have triggered something, she has a different presence, but it just didn’t work,” explained a sober national coach Martina Voss-Tecklenburg after the game.

Read Also:   for the first time, the English prevail as European champions

Team spirit despite disappointment: Germany’s soccer players comfort each other after the defeat against England

Lea Schüller, originally placed as a regular in the storm center and slowed down by a corona infection, was allowed to play from the start instead of Popp. Svenja Huth took over the captain’s armband. “Lea was already prepared,” Huth said after the game on ARD. “We accepted that as a team but unfortunately we weren’t rewarded.”

Magull brings the DFB team back into play

The game had started well for the Voss-Tecklenburg team. Unfazed by the noisy crowd, the defense withstood the English attacks. The central defense with Marina Hegering and Kathrin Hendrich was almost always safe, in midfield Lina Magull whirled. Many goal chances didn’t come about in a match that was very intense for both sides; Hardness was trumps. And Germany was denied a penalty by the Ukrainian referee, and the video check inexplicably left the clear handball unpunished.

Finally, the English women scored through Ella Toone with a remarkable lob over the flawless save Merle Frohms in the German goal (62nd). The Germans responded with a Magull goal and brought the game into overtime where the close fight continued evenly. Even in the decisive scene, it was just a little thing that tipped the scales in favor of the English women. Chloe Kelly used a confusion in the goal area after a corner to score the winning goal. She came to the ball with a long leg, the German defensive players were missing a few centimetres.

Stab in the heart: Chloe Kelly (3rd from right) shoots England to the European title

The horror was in the faces of the German players. The belief in the balance seemed gone. “We were close, especially after the 1-1 draw, and wanted to go 2-1 too. But goals decide games. That’s why the English team became European champions,” said the national coach with a gap of half an hour after the final whistle caught.

Praise for lightness, joy of playing and team spirit

Other experts also consistently praised the performance in the final and the overall performance of the Germans during the tournament. “I’m very sorry for Martina Voss-Tecklenburg and her entire team that they couldn’t crown their great performance with the title. But after the first disappointment, they can look back on this tournament with pride,” said Hansi Flick, national soccer coach, consoled of men. “The passion and at the same time lightness, enthusiasm and team spirit with which the team went through this tournament inspired me.”

Read Also:   Brazil wins 2-0 against Paraguay and will face Colombia in the final of the Copa América Femenina

“This great tournament by our team deserved winning the title as a worthy conclusion. Despite the defeat in the final, our team’s performances in England were great from the first game to the end,” said DFB Managing Director Oliver Bierhoff and prophesied: “This tournament will be a milestone for the development of women’s football in Germany.”

For the German players, however, such consolation came a little too early. One had been too close to great success. “We gave our all for 120 minutes and didn’t let the deficit shock us. Unfortunately, we didn’t reward ourselves,” said substitute captain Svenja Huth. “It just hurts like a pig right now.”