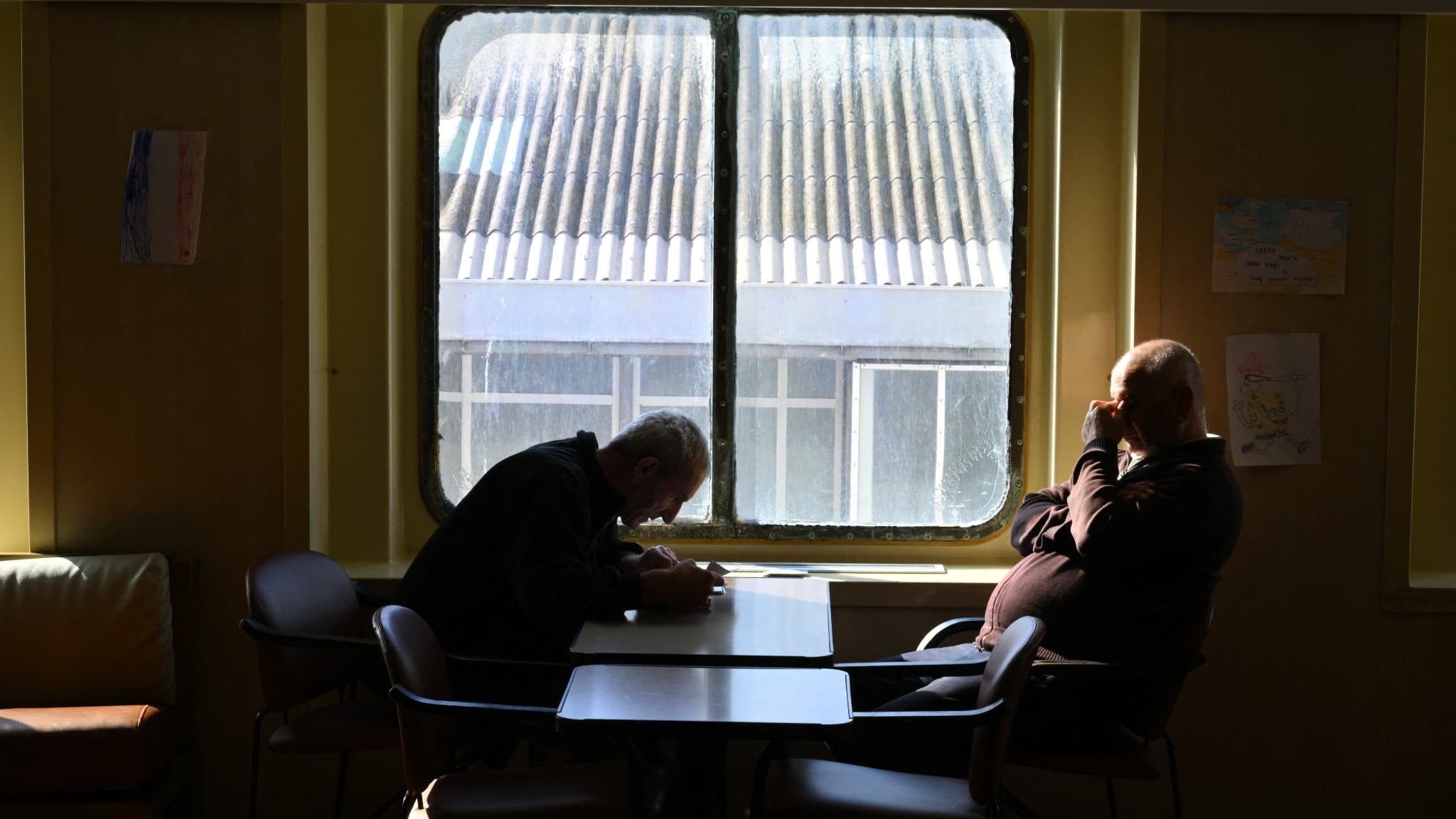 If the Ukrainian men and women who have found refuge in France have obtained temporary protection, this is not the case for people of foreign nationalities who have nevertheless also fled the war.

Inza Touré arrived in France on March 2. This 27-year-old Ivorian had been in Ukraine since 2019, studying at Dnipro University. He was supposed to get a master’s degree in international relations there at the end of June, but the Russian invasion and attack on the country decided otherwise.

Speaking the French language and having distant family on the side of Chambéry (Savoie), he decided to take refuge in France. As soon as he arrived, he also participated in the reception of Ukrainian refugees as an interpreter – he also speaks Russian. He is currently hosted by a volunteer from La Cimade – an association supporting migrants, refugees and asylum seekers.

For this young man from Côte d’Ivoire, there is no question of returning to the country before having obtained a diploma. “I left Côte d’Ivoire after a bachelor’s degree in English because there was not the course I wanted at the University of Cocody” (Félix-Houphouët-Boigny University in Abidjan, editor’s note), he confides to BFMTV.com.

“The objective has not been achieved. I will return to Côte d’Ivoire but only when I have my diploma, it is important for me”, adds Inza Touré, who aims to work in major international organizations, such as the UN or UNICEF.

Inza Touré obtained a temporary residence permit upon her arrival in France, which then expired. The young man was then notified by the prefect of an obligation to leave French territory (OQTF). A decision he had challenged: he had been admitted to Sciences Po Grenoble for the next academic year.

But at the beginning of July, Joseph Zimet – the prefect in charge of welcoming the displaced – announced a relaxation of the policy vis-à-vis non-Ukrainian students who had fled the war. “It was decided that no obligation to leave the territory would be applied nor any new OQTF decided, until the start of the academic year,” he told the World.

A new in-depth examination of their situation should therefore be carried out. “We will apply the same criteria to them as students who apply for a visa in France,” he added, estimating that the situation would concern “less than 200 people”. This is the case of Inza Touré, who has just learned that a student residence permit had been granted to him.

But for several months, his situation was precarious: a case far from exceptional. Mélanie Louis, responsible for deportation issues at La Cimade, has thus noticed that the refusals of temporary protection are multiplying vis-à-vis non-Ukrainian nationals who are working, studying or are in the process of applying for asylum in Ukraine. “Some are also notified of an OQTF”, she is indignant for BFMTV.com.

“We cannot speak of systematic refusal but there is a failure to take into account the personal situation of these people and their ties in Ukraine.”

Joseph Zimet, the prefect in charge of the reception of the displaced, announced that more than 100,000 Ukrainians had been received in France, benefiting from temporary protection. As a reminder, more than six million people have fled Ukraine since the beginning of the invasion by the Russian army.

Temporary protection is a new device activated for the first time by the European Union. It grants a temporary residence permit for a renewable period of six months and allows you to work, receive an allowance, benefit from French lessons, receive treatment or apply for social housing.

A “differentiated” treatment according to nationalities?

Non-Ukrainian nationals can benefit from this temporary protection. This is the case for nearly 3,500 third-country nationals, according to Joseph Zimet. But they must meet certain criteria.

Like holding a valid permanent residence permit issued by the Ukrainian authorities or not being able to return to their country of origin “in a safe and lasting way”, indicates the French Office for the Protection of Refugees and Stateless Persons (Ofpra). What denounces the French Coordination for the right of asylum (CFDA), an inter-associative collective.

“The differential treatment to which these people are subject, who experience the same traumas of exile, separation and uncertainty of the future as those who have Ukrainian nationality, is unacceptable (…) For many of them, a return to their country of origin would jeopardize the continuity of their university career or their professional life and would mean the end of a life perspective for which they have invested so much”, wrote the CFDA in a press release.

Asked about the subject, the Ministry of the Interior replied that a non-Ukrainian national who does not have a permanent residence permit in Ukraine “cannot benefit from temporary protection, regardless of the situation invoked in his country of origin (except family member, refugee, stateless person)”.

The ministry also specifies that “if the person concerned reports risks or threats in the event of returning to his country of origin (…) the person is directed towards an asylum application so that his individual situation can be examined in this context by the Ofpra”, (the French Office for the Protection of Refugees and Stateless Persons).

“His country of origin is Ukraine”

The French Coordination for the Right of Asylum (CFDA) denounces what it considers to be aberrations. Like the case of a young man of Armenian nationality who arrived in Ukraine at the age of 1, who was refused temporary protection by France, while his mother was able to benefit from it.

Gérard Sadik, responsible for asylum issues at La Cimade and representative of the CFDA, is concerned about a “very restrictive” and “silly and mean” interpretation of European legislation. He explains that the country of origin criterion does not always make sense.

“We told this young Armenian that there was no conflict in Armenia and that he could therefore return there”, he is indignant for BFMTV.com. “However, he has been living in Ukraine for almost thirty years. If he is of Armenian nationality, his country of origin is no longer Armenia but Ukraine, the country where he used to live.”

For this young Armenian, the outcome should be favorable. He recently won his case in court. He and seven other Armenian nationals, who lived in Ukraine, successfully challenged their refusal of temporary protection by the prefect of Seine-Maritime. “There is a sorting out of nationalities when it is necessary to ensure protection for all those who have fled the conflict”, still deplores Gérard Sadik, of the French Coordination for the right of asylum.

Alaedine Ayad is worried. This 30-year-old of Algerian nationality arrived in kyiv last October as part of his doctorate in microelectronics and photovoltaics. “I did not find funding in Algeria but my project was accepted in Ukraine,” he explains to BFMTV.com.

But after the start of the war, bombings near his apartment, several days of wandering trying to get on a train and several nights in the basement of a Ukrainian family, he manages to flee the country thanks to a friend . Arrived in Germany, he chose France: he speaks the language and a large part of his family lives there. His grandfather, naturalized French, is also buried there. Like some of her aunts, born and dead in France.

But he was denied temporary protection. The one-month temporary residence permit issued to him has expired and he has received no response from the prefecture to his application for a residence permit. “I am undocumented.” He is however registered – thanks to the collective Le Poing levé – in a Parisian university for the next school year.

“I had to give proof of resources, I had to prove that I had more than 6,000 euros in my account, half if I’m hosted for free. Luckily my cousin who lives in France vouched for it.”

For the moment, Alaedine Ayad is hosted at the hotel by an association. He shares his room with two other young men who also fled the war in Ukraine. He explains that it is “impossible” for him to return to Algeria now.