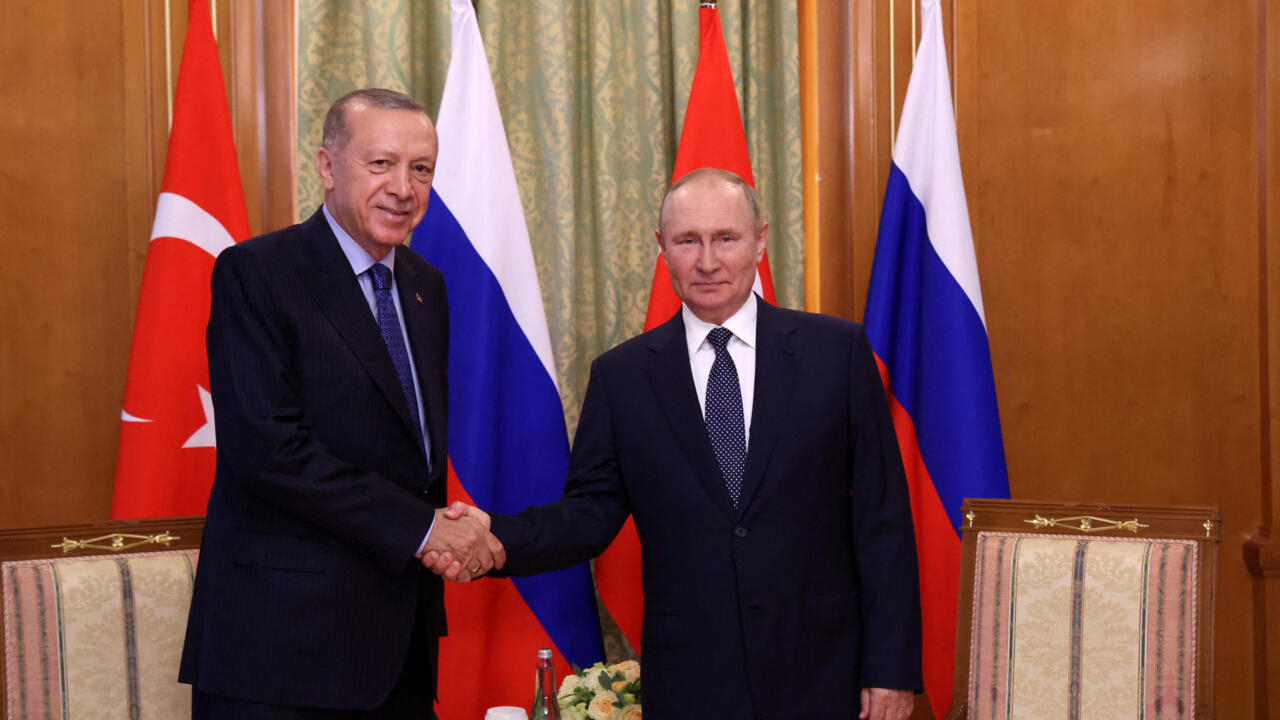 The meeting of both leaders was held in Sochi and lasted about four hours. It dealt with issues such as compliance with the grain export agreement signed with Ukraine and the situation in Syria, an active combat zone for Turkey and Russia.

“From Turkey’s point of view, Russia plays a special role in the world arena.” No one thought to hear these words spoken by the Turkish president since the “reopening” of relations between Russia and Turkey.

The shooting down of a Russian military aircraft operating in Syria in 2015, by the Turkish Army, brought relations between the two nations to their lowest point.

Today, in a different context, and with two active combat fronts in Ukraine and Syria, Moscow and Ankara are strengthening relations.

And it is that Turkish President Recep Tayyip Erdogan visited his Russian counterpart, Vladimir Putin, at his residence in Sochi. This represents the second meeting between the two in less than a month.

The issues on the table were the application of the grain export agreements, the situation in Syria, Ukraine and Libya.

Read Also:   Portugal had the hottest July in nearly a century

Erdogan was accompanied by his foreign, defense, and trade ministers, among others. On more than one occasion, the Turkish head of state has expressed his willingness to mediate in the Russian-Ukrainian conflict.

In this regard, the head of the Kremlin spoke positively about the participation of his counterpart in the agreement for the movement of Ukrainian grain.

“With their direct participation and with the mediation of the UN secretariat, the problem related to Ukrainian grain supplies from Black Sea ports was solved,” he said.

“Supplies have already started. I want to thank you for this and because, at the same time, a joint solution was adopted on the uninterrupted supply of Russian food and fertilizer to the world market,” Putin stressed.

In the joint declaration, both parties advocated “full compliance” with the Istanbul agreements, so that Russia can export “without obstacles” its grain and fertilizer.

Use of the ruble as a common currency for business

One of the most important points of the meeting was the partial payment in rubles to Moscow for the gas provided by Russia. A movement that can strengthen the Russian currency at a time when Western sanctions are aimed against it.

According to Russian Deputy Prime Minister Alexandr Novak, both nations are “gradually moving to payment in the national currency. Part of the supplies will be paid for in rubles. This is, effectively, a new stage that opens up new possibilities.”

According to Vladimir Putin, “the Turkish Stream, unlike all other routes of our hydrocarbon supplies, works correctly, dynamically, without failure (…), it has become one of the main gas supply arteries Russian to Europe.

He also pointed out that “European partners should be grateful to Turkey because it guarantees the smooth transit of our gas” to that market.

There were several points on which both presidents showed agreement.

It would not be the first time that the Turkish president has shown himself willing to mediate for the end of the Russian-Ukrainian conflict. It was one of the issues on the table, but this time with success, which, until now, has represented the grain export agreement from Ankara.

Read Also:   Orban defends himself against comments branded as "anti-Semitic" amid criticism

Both confirmed their willingness to work together against terrorist organizations in Syria. An active war field in which the two nations have objectives set.

According to the media, Erdogan is trying to get Putin’s approval for a new Turkish military operation in northern Syria against the Kurdish militias, the People’s Protection Units (YPG). Key issue in the last summit held with the Russian president and the Iranian president, Ebrahim Raisi, on July 20 in Tehran.

On that occasion, Putin spoke out clearly against the activities of “external forces” in Syria and advocated restoring Damascus’ authority over the entire territory.

Satisfaction between both dignitaries

“Our meeting (…) will open a very different page in Turkish-Russian relations,” Recep Tayyip Erdogan said in comments broadcast on Turkish television, while stressing that the talks on Syria would bring “new relief to the region”.

These comments ratify the success, in the view of both parties, of the meeting, which lasted about four hours.

For his part, Putin praised his counterpart, considering the grain agreement “very important”, in view of the serious problems faced by many countries due to the interruption of grain exports from Ukraine and Russia.

The meeting between the two takes place in a complex international context, in which the lack of exports by Ukraine, one of the world’s leading cereal producers, ceased its activities due to the Russian invasion.

In this sense, the world has been on the verge of a global food crisis, also due to the lack of Russian exports, sanctioned by the ongoing aggression.

With EFE and Reuters