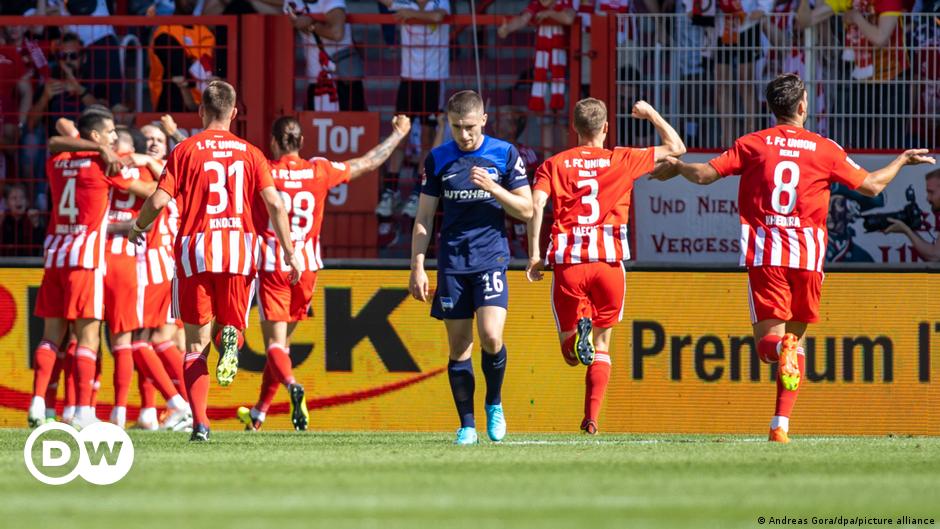 The looks of the three most important men at Hertha BSC did not differ much: Sandro Schwarz, Fredi Bobic and Kay Bernstein stared in frustration. Hertha’s new coach, the sports director and the president watched with frozen faces as the start of the season went awry. Because after the defeat in the first round of the DFB Cup a week ago, the Berliners also lost their first league game in the Bundesliga – and of all things in the Berlin derby at 1. FC Union.

Before the game in the sold-out “An der Alten Försterei” stadium, Bobic had described his own club, which had only saved itself in the relegation last season, as an “outsider” against Europa League participants Union: “We can’t stand up and say that we are the favourites,” said Bobic. His trainer Schwarz, on the other hand, had called for a different attitude: “To march ahead, to have charisma, to develop group dynamics, that will be crucial,” said the 43-year-old.

Plattenhardt: “We have to fix problems”

However, the game went in a different direction from the start: After just under a minute, things got dangerous for the first time in front of the Hertha goal. Again and again Hertha’s goalkeeper Oliver Christensen had to intervene and thwart Union chances.

“Keep working hard, then we will get the points” – Marvin Plattenhardt believes in the turning point

Union still scored the deserved lead before the break, then came out strong after the change of sides and immediately followed up with a brace. 3:0 after just 54 minutes – the game was decided. Only too late did Schwarz revitalize the offensive with a few substitutions, but the goal to make it 1:3 came too late. Union was derby winner for the fourth time in a row.

“It was definitely a deserved victory for Union. They were better in many areas, had more grip and were more gallant,” Sandro Schwarz admitted. For Hertha, the new season starts with the most unfavorable result. “We had a few chances, but unfortunately we didn’t score. Then we conceded goals far too easily,” Hertha captain Marvin Plattenhardt then analyzed on Sky. “It’s precisely these problems that we have to eliminate in the next few weeks. And we also have to step up our game offensively.”

Back in the downward spiral?

So are the problems of the new season the same as in the old one? Hertha BSC from the beginning in the negative maelstrom and only able to keep up for a half or an hour and then fall apart at the first setback? “I don’t see it that way,” said Plattenhardt. “I think we’ve made a step forward in preparation. We’ve developed as a team. We’re lacking goals at the moment. We have to put that aside and move on.”

The fact that the Hertha fans, whom Hertha President Kay Bernstein had praised as “capable of suffering” before the game, apparently believe in their team and the change for the better, became apparent after the game. After the last lost derby last season, there were still ugly scenes in the Olympic Stadium: the players were insulted and their supporters forced them to take off their Hertha jerseys because they weren’t worthy of wearing it. This time there was encouraging applause and a kind of solidarity with the team when the beaten players stepped in front of the away block after the final whistle.

The only question is how much patience Hertha fans actually have if the defeat at Union Berlin is not the last and Hertha is actually stuck in the relegation zone from the start.

The game in numbers: