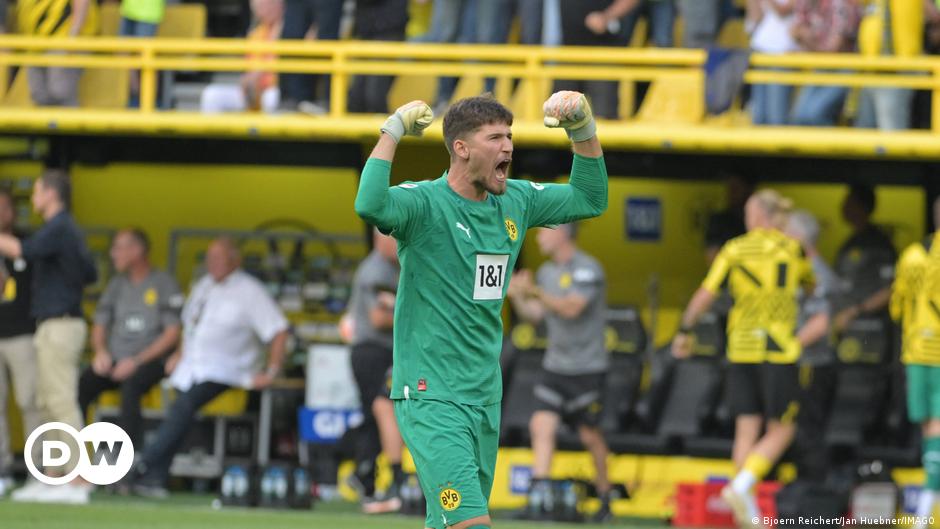 That hasn’t happened to Bayer Leverkusen’s top scorer Patrik Schick very often: Twice the Czech was all alone in front of the Dortmund goal, twice he had the cheering on his lips, but both times someone else shouted and cheered: Gregor Kobel, the goalkeeper from Borussia Dortmund. The BVB keeper parried once with a long leg, but with Schick’s other 100 percent chance he was lucky that the striker’s shot landed on his thigh. The 24-year-old Swiss developed into the “green wall” in his dark green goalkeeper uniform, cheered by the “yellow wall” on the Dortmund south stand. Kobel had to reach behind him twice, but a Leverkusen player had previously been offside. So it was Kobel who held on to BVB’s 1-0 (1-0) opening win.

The supposed match winner didn’t want to take the credit for the win alone. “I’m super happy with the team,” said Kobel after the success with which BVB followed one day after FC Bayern’s opening win. “It’s a great win today. For me, as a goalkeeper, it’s always great to keep a clean sheet. That’s why I’m very happy with today’s game.”

Kehl: “Have scratched and bitten”

But not only Kobel’s performance was good, the attitude of the black and yellow was right overall: Unlike the last meeting with Leverkusen, which ended in a 5-2 away win for the Werkself in the second half of last season, the Dortmund Bayer team hardly left any room this time and time to unleash their dreaded offensive game. “Of course you saw that we weren’t convincing in terms of play, but we accepted everything,” said Dortmund’s winning goal scorer Marco Reus. “Leverkusen played us to the ground here last time because they were able to counter a lot. We had that very well under control today. We didn’t let them combine.”

BVB sports director Sebastian Kehl saw it similarly: “We scratched and bit. But if we hadn’t fought back like that, we wouldn’t have won the game in the end. That’s what people want to see here. We deserve it too , even if it ended up being quite even.” It’s good when you have a goalkeeper in the box who can defuse an opponent’s 100 percent chance of scoring.

Hradecky does not know the rule

After the game, however, there was much more discussion not about Kobel, but about his opponent in the Leverkusen goal. Shortly before the end, Lukas Hradecky fished a long ball away from the approaching Reus by reaching beyond the edge of the penalty area with both hands. A violation of the rules that was only finally revealed by video evidence and which resulted in the red card.

“I didn’t realize that at all,” Hradecky admitted afterwards. Apparently he hadn’t known he was committing a red-worthy offense. “Maybe I should have paid more attention to referee training. Otherwise I would have acted differently, I could have avoided the chance to score. Of course I’ve learned that now. But the decision had already been made: if the ball bounces, I’ll catch it easily. “

Read Also:   Will the euphoria of Euro 2022 be followed by sadness in the women's Bundesliga?

It says Lunev on it, but Tapsoba is in it – the central defender went into the goal after the dismissal

Because Bayer coach Gerardo Seoane had already exhausted his transfer quota, central defender Edmond Tapsoba put on a goalkeeper jersey for the last few minutes and stood between the posts. But he didn’t have to hold the ball anymore, and a short time later it was over. So Gregor Kobel could justifiably claim to have been the best goalkeeper of the evening out of all three.