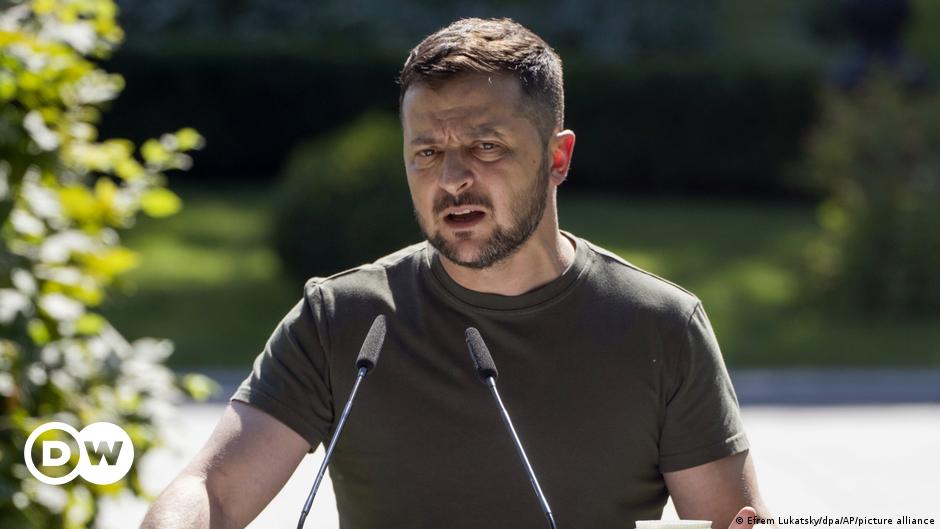 The essentials in brief:

After the Zaporizhia nuclear power plant was shelled, Ukrainian President Volodymyr Zelenskyy called for sanctions against Russia’s nuclear industry. “Anyone who creates nuclear threats for other peoples is definitely not in a position to use nuclear technology safely,” Zelenskyj said in his video speech on Saturday night. Specifically, he called for punitive measures against the Russian state-owned company Rosatom.

On Friday, the governments in Kyiv and Moscow accused each other of shelling Europe’s largest nuclear power plant in the Russian-occupied city of Enerhodar. Ukraine accused Russia’s troops of attacking the nuclear power plant site themselves. Selensykyj spoke of an “act of terrorism”.

The Ministry of Defense in Moscow, on the other hand, blamed Ukrainian soldiers for the shelling and announced that a power plant block had to be partially shut down. In addition, in Enerhodar the electricity and water supply failed in some districts.

Just a few days ago, the International Atomic Energy Agency (IAEA) expressed concern about the situation around the power plant in south-eastern Ukraine. There is a combination of violations of all possible nuclear safety measures, IAEA boss Rafael Grossi told DW. His organization has been prevented from carrying out an inspection since the beginning of the war.

The mayor of Hiroshima has called for nuclear disarmament in the face of global concerns that Russia might use nuclear weapons in its war of aggression in Ukraine. At a commemoration ceremony marking the 77th anniversary of the US dropping a nuclear bomb on the Japanese city, Mayor Kazumi Matsui warned that the world’s reliance on nuclear deterrence was growing in importance. “We must immediately render all nuclear buttons meaningless,” Matsui said.

“Humanity is playing with a loaded gun”: UN Secretary-General António Guterres at the commemoration in Hiroshima

Read Also:   Asian markets fall amid tensions between the US and China over the possible arrival of Pelosi in Taiwan

At the commemoration in Hiroshima Peace Park, UN Secretary-General António Guterres warned that “crises with serious nuclear overtones” are spreading rapidly – “from the Middle East to the Korean Peninsula to the Russian invasion of Ukraine”. Mankind is playing with a loaded gun, Guterres said. It was the first time in 12 years that a UN chief attended Hiroshima’s annual commemoration. Russia and its ally Belarus were not invited.

Gas savings appeal from the head of the network agency

According to the Federal Network Agency, the Germans have to save significantly more energy than previously assumed after recent cuts in Russian gas supplies. “If we don’t save a lot and don’t get any additional gas, we have a problem,” said head of the authorities Klaus Müller of the newspaper “Welt am Sonntag”. A gas shortage can only be prevented if consumers save at least 20 percent. In addition, the transmission of gas to neighboring countries would have to be reduced by 20 percent, and ten to 15 gigawatt hours of gas from other countries would also be needed.

Read Also:   Kansas, the first US state to ratify the right to abortion in a referendum

Will it soon only be possible to heat individual rooms? (icon picture)

In the event of a gas shortage, private households are not protected from prescribed restrictions, said Müller. “It’s certainly not protected by the regulation if someone feels they need to heat their home to excessive temperatures in this emergency situation.” In principle, regulations are also conceivable that only allow individual rooms to be heated. “I don’t want to speculate about anything because we’re still having these discussions,” said Müller. “But I want to make it clear: In order to secure jobs, I consider austerity measures for private households to be legitimate, as long as they do not affect the protected, vital area.”

This article will be continuously updated on the day of its publication. Reports from the combat zones cannot be independently verified.