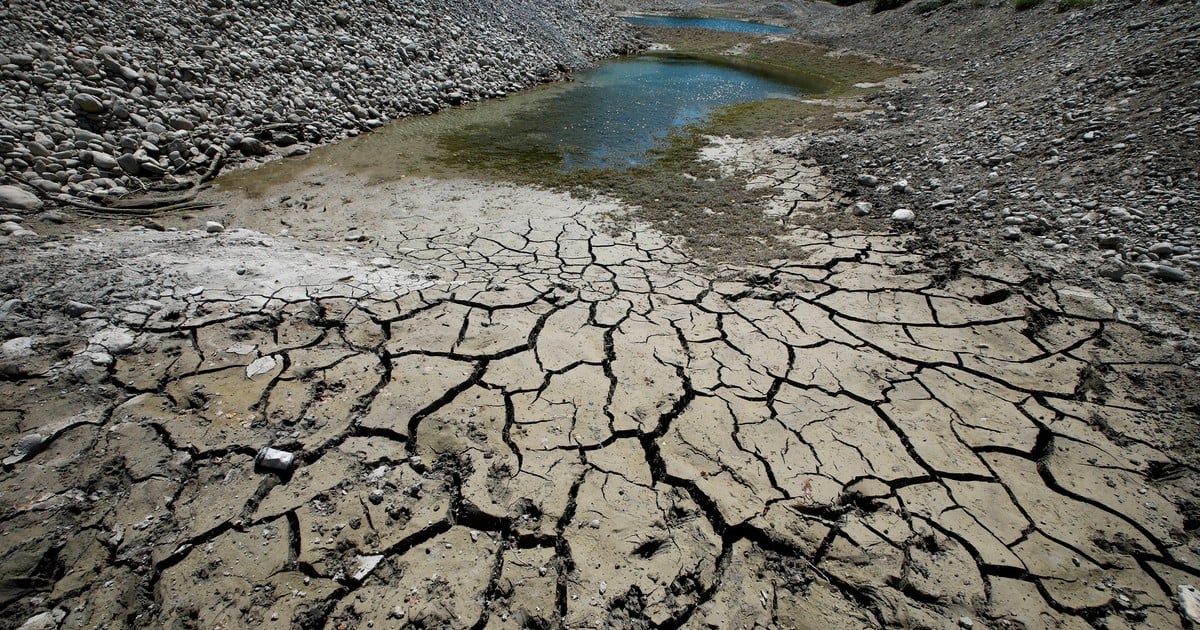 A historical drought and the most serious antecedent of climate change in France. The lack of water It crosses the entire French territory and has never hpened before.

Prime Minister Elisabet Borne activated the interministerial crisis cell on Friday due to this “historical situation of lack” of water that the country is going through, amid powerful fires of thousands of hectares. A hundred communes they have no more drinking water in these hours. A situation that had never been seen and it goes to force water rationing in the country.

This drought is linked to the brutal fires, which burn due to the suffocating heat and the lack of rain. From a bottle left in a dump to very dry grass, any element can cause them in the high temperatures that are recorded. This Thursday it came to 40 degrees in Paris. Another heat wave is expected from Monday.

It shows no signs of the drought improving and shows how brutally climate change has been implanted in Europe and its link to the fires in recent months.

Borne announced on Friday that “the interministerial crisis unit would be activated to deal with this worst drought ever recorded in our country.”

At noon, the Minister for the Ecological Transition, Christophe Béchu, said that “more than a hundred municipalities in France today no longer had drinking water.” A “historic” situation, in his words.

“In these municipalities”, the minister specified during a visit to the Alpes-de-Haute-Provence, “there are supplies that they are made with drinking water trucks that are transported, since there is nothing left in the pipes or in the channels”.

“The challenge is to tighten a series of restrictions to avoid reaching” this situation.

Seillans, in the Var region, is a town supplied with drinking water, in the heart of French Provence. A very touristic enclave, with its small charming hotels and tourists, who practice hiking and resting in the middle of European summer vacations.

Read Also:   Report that the Chinese Police will provide training to officers from the Solomon Islands

“I fear that other towns are in the same situation,” said its mayor, René Hugo. Trucks with water must arrive every day to supply them and distribution should be rationed equitably.

Although it was recognized as one of the most beautiful little towns in France, it is a classic “village”, “hung” in the vicinity of the Esterel mountains and the southern Alps, whose limits are the beaches of Cannes and St Rhael, over the Mediterranean Sea. Very close to the Côte d’Azur, the tourist paradise of France, where today there are millions of tourists after the pandemic, with the risk of being affected by the restrictions.

The Government’s reaction is justified by the fact that “weather forecasts indicate that the situation could last for the next 15 daysor even become even more worrisome.”

Without mentioning the obligation or restriction, the press release calls on all French people to “be very attentive to the use of our water resources”.

“Restrictive measures have been and will be taken where necessary to guarantee the priority uses of health, citizen security and the supply of drinking water,” said the Matignon palace, seat of government.

At least 93 departments were subject to water restrictions, 62 of which are considered “in crisis”, the highest alert level. Since Wednesday they have been joined by Creuse and Nièvre.

At this maximum alert level, the irrigation of lawns, vehicles or crops, as well as the filling of tanks or swimming pools, is prohibited.

Hyeres, on the Mediterranean, is one of the cities most affected by the drought. It has been on alert since July 4: It has cut off the fountains in the squares, the showers on the beach, it has been forbidden to fill the pools, wash cars or boats. It is the culture of lack of water, that the people who live there has already accepted.

The debate is also underway on social media around the exemptions granted to golf courseswho can still water their greens, even when the department that houses them is in a “drought crisis.”

The measures to be taken

This government crisis cell must allow “guaranteeing regular feedback from the Department Prefects of the most affected areas, anticipating the possible activation of ORSEC + water + for the affected agglomerations and coordinate the necessary civil security measures (water supply for municipalities, delivery of drinking water)”, according to this government source.

It will also monitor “the impacts of this drought for our energy production and transportation infrastructure and for our agricultural sector, in particular the livestock sector.”

Prime Minister Elisabeth Borne asked the prefects to meet, “starting next week, in each area of ​​tension, the local water commissions and, where they exist, the other local consultation structures for water management” in order to to define “the prioritization of uses”, if necessary”.

The question of sharing the uses of water agitates the political class. On Friday morning, the LFI deputy, Manuel Bompard, considered that it was “a matter of justice.”

“When there are problems of tension due to the use of water, we must favor the uses necessary for everyone’s life, and not the leisure of a few,” he said. He criticized the irrigation of golf courses.

Read Also:   They investigate in Chile the appearance of a huge sinkhole near a mine (VIDEO, PHOTOS)

To France and Europe It is crossed by rivers and canals, where goods are transported. River transport is also affected: on the Rhine, ships must be lightened by a third due to “sinking problems”, according to France’s Voies Navegables. Nearly 600 km of canals are closed, particularly in the Grand Est and Burgundy, which affects nautical activities.

The issue of water resources also arises in tourist areas, which see their population increase strongly during the summer period, when the resource is scarce.

Julio suffered a worrying drought with no signs of improvement.

.”We experienced a particularly dry winter and spring, although we began a summer with very low water tables. Added to this is a summer season with “heat waves” and a lasting absence of rain. The whole country is affected. In this sense, the drought will be worse and more difficult than the one in 1976, which had affected northeastern France,” he said.

The situation is worrying in Var, on the Côte d’Azur, but also in Poitou Charentes, and in Bourgogne Franche Comté. The lack of rain there breaks all records.

The fear is that the lack of rain will dry up the rivers and lakes and degrade the ecosystem.

There are 70 communes in France most threatened by fires, according to the Meteorological Fire index in the surroundings of each city and 15 kilometers from its surroundings. This indicative is specified for the year 2030 to 2050.

The top ten most at risk of fire are Arles, Avignon, Perpignan, Hyeres, Nimes, Marseille, La Seyne sur Mer, Aix en Provence, Toulon and Narbone, almost all in the south of France.