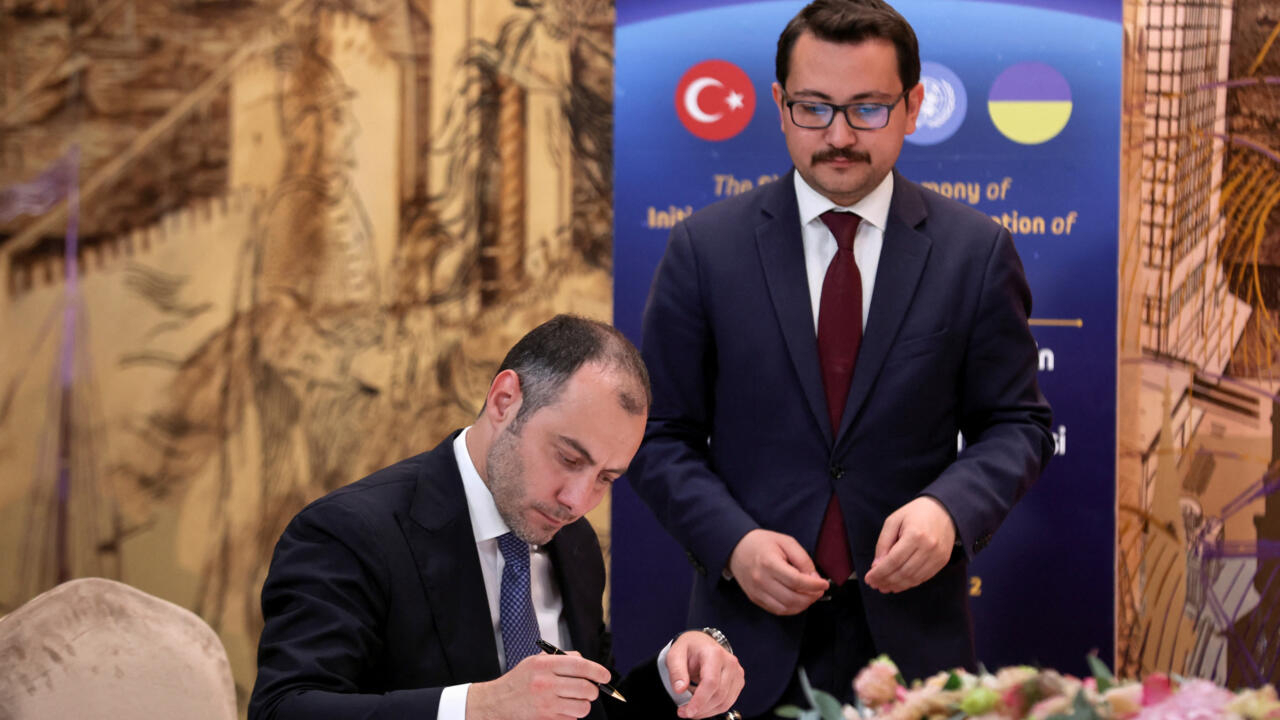 Ukraine and Russia signed -separately- with Turkey and the UN agreements on the export of Ukrainian cereals to the Black Sea, during an unprecedented ceremony between countries at war, this Friday, July 22. This is what is known about the agreement.

On Friday, July 22, Ukraine and Russia signed an agreement in Istanbul that allows the export of Ukrainian grain blocked in the Black Sea ports due to the war, and which is badly needed on world markets.

Twenty million tons of wheat are blocked in Ukraine, or 1% of world consumption, according to ‘Les Echos’. This blockade threatens the world, and Africa in particular, with a serious food crisis.

kyiv and Moscow signed two identical but separate texts, at the request of Ukraine, which refused to sign any document with Russia.

The four delegations met on the grounds of the Dolmabahçe Palace, on the Bosphorus in Istanbul, in the presence of the Secretary General of the United Nations, António Guterres, the Turkish President, Recep Tayyip Erdogan, as well as the Defense Ministers of Turkey and Russia, and Ukraine’s Infrastructure Minister Oleksandr Kubrakov.

This agreement, negotiated with kyiv and Moscow and encouraged by António Guterres, who arrived urgently in Istanbul on Thursday night, should ease world markets, the two belligerent countries alone account for 30% of world wheat trade.

Departure and arrival inspections in Turkey

Read Also:   Biden to Travel to Europe Next Week for NATO Summit

Safe corridors will allow the traffic of merchant ships in the Black Sea, whose strict neutrality Moscow and kyiv undertake to respect.

kyiv estimates that its exports could start from three ports: Odessa, Pivdenny and Chornomorsk, and hopes to expand their number in the future.

The inspection of the ships carrying the grain was a requirement of Moscow, which wanted to ensure that they did not simultaneously deliver weapons to Ukraine.

These inspections will not be carried out at sea for some time, for practical reasons, they will be carried out in Turkey, probably in Istanbul, which has two important commercial ports: one at the entrance of the Bosphorus (at Haydarpasa) and the other at the Sea of ​​Marmara (at Ambarli).

Carried out by representatives of the four parties, these inspections will be carried out at the departure and arrival of the vessels.

The negotiators, however, desisted from clearing the Black Sea of ​​mines, placed mainly by kyiv to protect its coasts, due to lack of time. But the shipments will be escorted by Ukrainian ships until they leave territorial waters.

Under the agreement, if mine clearance is required, it must be done by a “third country” other than those involved.

The agreement is signed for four months and is automatically renewed. Currently there are between 20 and 25 million tons of expired grain in the silos of the Ukrainian ports, and at the rate of eight million tons evacuated per month, this period of four months should be enough to liquidate the stocks.

A counterpart for Russian cereals and fertilizers

A memorandum accompanies this agreement, signed by the United Nations and Russia, which guarantees that Western sanctions against Moscow will not refer to grain or fertilizers, directly or indirectly.

This was a Russian requirement that made it a sine qua non for the signing of the agreement.

On July 13, a first round of negotiations between military experts from the three countries involved and the UN took place in Istanbul, from which some optimism arose. But it gave way to uncertainty following demands made earlier this week by Moscow after the Iran-Russia-Turkey tripartite summit in Tehran.

Russia obtained assurances that Western sanctions would not apply, directly or indirectly, to its own exports of agricultural products and fertilizers.

“Even if Russian (agricultural) products are not affected by sanctions, there are blockades in shipping, insurance and the banking system,” Turkey’s Foreign Minister Mevlut Cavusoglu argued on Thursday.

In addition, according to a diplomat in New York, the United States has offered guarantees that large-tonnage ships will be provided to Russia to facilitate the export of its grain and fertilizers.

The United States had welcomed this agreement on Thursday and urged Moscow to implement it, warning that it was Russia’s responsibility to implement it.

The head of the UN thanked Russia and Ukraine for “overcoming their differences to make way for an initiative at the service of all”. Now the deal “must be fully implemented,” he pleaded.

President Erdogan acknowledged that “it has not been easy” to get there, and hoped that the signing of this agreement, which comes almost five months after the start of the conflict, “strengthens the hope of ending this war.”

According to the World Food Program (WFP), 47 million more people have been exposed to “acute hunger” since the beginning of the war.